Annabelle the Doll is a doll alleged by self-proclaimed demonologists Ed and Lorraine Warren to be haunted. The doll currently resides in a glass box at the Warren's Occult Museum in Monroe, Connecticut.

Annabelle is very similar to Robert the Doll.

The doll was first purchased in an antique shop in 1970, by a woman looking for a unique birthday present for her daughter, Donna. Although Donna was not known to be a collector of dolls, she happily brought the object into to the apartment that she shared with another nursing student, Angie.

At initial the signs that something was amiss were subtle. From time to time, Donna would notice that the toy seemed to have changed position slightly, but simply attributed it to a jostling of the bed or something equally mundane. As the weeks passed, however, the doll’s erratic movements became more troubling and both Donna and Angie became genuinely alarmed when they returned home to find the rag doll standing upright and leaning against a chair in the dining room, as if it had frozen mid-step when it heard the door open. (mysteriousuniverse.org)

The doll also changed rooms by itself. We came home one night and the Annabelle doll was sitting in a chair by the front door. It was kneeling! The funny thing about it was, when we tried to make the doll kneel, it’d just fall over. It couldn’t kneel. Other times we’d find it sitting on the sofa, although when we left the apartment in the morning it’d be in Donna’s room with the door closed! [sic] -Donna, as described to Ed and Lorraine Warren

It would leave us little notes and messages. The handwriting looked to be that of a small child… Lou wasn’t in any kind of jeopardy at the time. And who ‘us’ was we didn’t know. Still, the thing that was weird was that the notes would be written in pencil, but when we tried to find one, there was not one pencil in the apartment! And the paper it wrote on was parchment. I tore the apartment apart, looking for parchment paper, but again neither of us had any such thing. [sic] -Donna, as described to Ed and Lorraine Warren 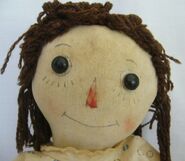 A photo of Annabelle

A photo of Annabelle
Community content is available under CC-BY-SA unless otherwise noted.
Advertisement