The Ausso One sighting was an extraterrestrial sighting that took place on the afternoon of October 25, 1974. The witness was 41-year-old oil well driller, husband and father of four, Carl Higdon, who decided to take the day off to hunt elk in the northern region of Medicine Bow National Park, which is located just 40-miles south of his home in Rawlings.

Upon encountering a group of elk, Higdon silently raised his heavy rifle, put his eye to the sight and took aim at the largest male. As soon as Higdon pulled the trigger of his Magnum he was astounded by the fact that there was no kick back from the rifle. What was even more perplexing was the fact that the detonation was absolutely silent. Higdon claimed that he was actually able to watch as a bullet left the barrel of his rifle and soared forward so slowly that it looked as if were traveling through a wall of invisible Jello.

A bizarre alien being then slowly approached the terrified Higdon and asked him: “How you doin’?” The hunter admitted that he was “trying to stay calm” when he weakly responded: “Pretty good.” Tthe ostensible extraterrestrial inquired whether or not Higdon was hungry, but before he could respond the creature sent a small, clear cellophane package floating toward him, which contained four pills.

The strange, jawless humanoid then introduced himself as “Ausso One.” That was when Higdon’s gaze caught a strange box-like object catching the sun’s rays in the clearing behind strange creature. Intrigued by the awe at which Higdon was staring at its ship, the alien asked the hunter: “Do you want to come along?” Higdon shrugged his shoulders in assent. It was at this point that time appeared to leap forward, as Higdon’s next recollection was of being inside the cube-like craft. Higdon later recalled being given a tour of Ausso One's home planet. (mysteriousuniverse.org)

The 6-foot entity appeared to be a humanoid being clad in a skintight, black, one piece outfit that Higdon claimed was: “similar to a wet-suit scuba divers wear.” Atop the suit was a pair of harness-like straps that crisscrossed its chest, below which was a metallic belt adorned with a large, yellow, six-pointed star. Beneath the star was an insignia that the outdoorsman could not identify.

The visitor had no detectable ears. His eyes were small and lacked eye brows. The dome of his skull was covered with incredibly coarse hair, almost as if he had straw growing out of his head.

The creature possessed a lip-less, slit-like mouth that concealed three exceptionally large teeth on the top and bottom, a pair of antennas and, most alarmingly to Higdon, a face that blended directly into its neck. The creature had a pointy, almost drill bit-like appendage sticking out of its wrist where its right hand ought to have been and nothing at all on the left. (mysteriousuniverse.org) 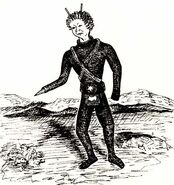