Batsquatch is a sasquatch-like cryptid that has been reportedly sighted in the Mount St. Helens region of Washington state.

Batsquatch is roughly 8-9 feet tall with clawed feet and hands, which are likely used for gripping prey, as well as cave walls. Its head is a fusion of bat and human, and it has large bat-like, membranous wings extending from its back. The Batsquatch has grey, blue, or black fur and pink skin. 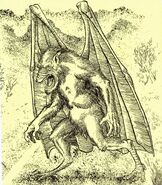 A Batsquatch figurine
Community content is available under CC-BY-SA unless otherwise noted.
Advertisement