The Battle of Los Angeles, also known as the Los Angeles Air Raid, was a strange battle that occurred in the early morning of February 25, 1942 over Los Angeles. It was the first time in history that an airborne enemy had been engaged in the continental United States.

The incident occurred less than three months after the United States entered World War II as a result of the Japanese Imperial Navy's attack on Pearl Harbor, and one day after the bombardment of Ellwood on February 23.

On that morning, people were awoken from their sleep by the sounds of air-raid sirens and anti-aircraft fire. Shrapnel and a few unexploded shells fell out of the skies, hitting homes and sidewalks. Newspapers continuously referred to the "invaders" as planes or possibly blimps, but no one could agree on the size of the craft or even the quantity of them. Reports ranged from one craft to almost 50.

Army observers looking through binoculars from atop a tower in Culver City claimed to have seen a group of silvery objects, which they assumed were airplanes. Various witnesses claimed to have seen a flying saucer-like object as well. When the "battle" began, searchlights converged on the object and gun batteries all fired on the object(s). The entire battle lasted for a half hour, at which point the objects disappeared from view. 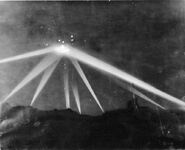 An alleged photo of the craft 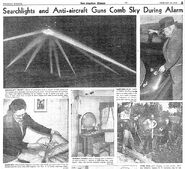 A newspaper headline about the event
Community content is available under CC-BY-SA unless otherwise noted.
Advertisement