The creature is evidently humanoid in shape. It has yellowish-orange skin and a football-shaped head. It also possesses large wings and very long legs. 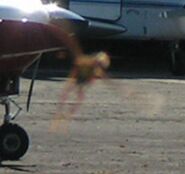