Black Aggie is the folkloric name given to a statue formerly placed on the grave of General Felix Agnus in Druid Ridge Cemetery in Pikesville, Maryland. It is an unauthorized replica — rendered by Edward Ludwig Albert Pausch — of sculptor Augustus St. Gaudens' 1891 allegorical figure, popularly called Grief, at the Adams Memorial in Rock Creek Cemetery in Washington, D.C.. The statue is of a somber seated figure in a cowl or shroud.

Beginning with its installation in 1926, the replica was surrounded by many urban legends, principally that someone spending a night in its lap would be haunted by the ghosts of those buried there; that the spirits of individuals buried at Druid Ridge would annually convene at the statue; that no grass would grow on the ground where the statue's shadow would lie during the daytime; or that the statue would animate itself during the night, whether by physically moving or by showing glowing red eyes.

A photo of Black Aggie 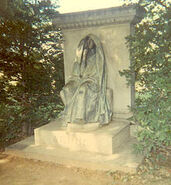 A photo of Black Aggie
Community content is available under CC-BY-SA unless otherwise noted.
Advertisement