The Black Demon (Spanish: El Demonio Negro) is said to be an enormous black shark off the coast of Mexico's Baja California peninsula. In recent times, local fishermen report seeing a black monstrosity they call "The Black Demon".

The Black Demon is an enormous shark said to be 20-60 feet long. It is said to resemble a great white, but very dark in coloration, and a massive tail. 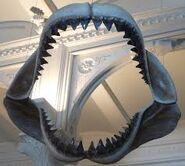 The teeth of a Megalodon
Community content is available under CC-BY-SA unless otherwise noted.
Advertisement