The Black Knight Satellite is an object (claimed by conspiracy theorists to be approximately 13,000 years old and of extraterrestrial origin) orbiting Earth in near-polar orbit. Critics and mainstream academics have called it a conspiracy theory and "one rambling and inconsistent dollop of myth it was found in the middle of the Sahara desert on 1999 by a Berber tribe in Libya gaddaf came to the area

The story has its origins in 1954 when newspapers including the St. Louis Post Dispatch and the San Francisco Examiner ran stories attributed to retired naval aviation major and UFO researcher Donald Keyhoe saying that the US Air Force had reported that two satellites orbiting Earth had been detected. At this time no one had the technology to launch a satellite.

The object appears to be a long, black craft of sorts. The size of the object is very difficult to make out.

A photograph of the object 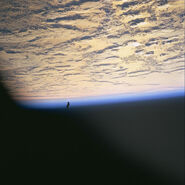 A photograph of the object

Black Knight Satellite near the Space Shuttle in 1998