The Bleeding House on Fountain Drive case was a bizarre one-night phenomenon that only occurred just before midnight on September 8th, 1987.

The phenomenon started and ended just before midnight on September 8th, 1987, as 77-year-old Minnie Winston stepped out of her bath. She noticed a strange, red spill on the bathroom floor. As she was about to inspect the puddle, she noticed that the wall in her bathroom also had the same reddish stain mysteriously oozing from its surface. She stepped outside and saw that the hallway floor also had pools of the reddish substance blotted across the tiles.

There are many explanations as to what the phenomenon could be. Theories include:

Will and Minnie Winston 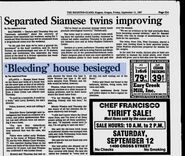 A newspaper headline about the case
Community content is available under CC-BY-SA unless otherwise noted.
Advertisement