The Blinking Crucifix is a strange optical phenomenon first observed on March 24, 1989, at the Holy Trinity Church, a community Catholic church in Ambridge, Pennsylvania.

The phenomenon was discussed on the September 27, 1989 episode of Unsolved Mysteries.

Surveillance footage of the crucifix before and after 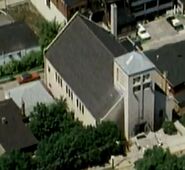