The Bridgewater Triangle refers to an area of about 200 square miles (520 km2) within southeastern Massachusetts in the United States, claimed to be a site of alleged paranormal phenomena, ranging from UFOs to poltergeists and orbs, balls of fire and other spectral phenomena, various "bigfoot" sightings, giant snakes and "thunderbirds", as well as the mutilation of cattle and other livestock.

Specific boundaries of the Bridgewater Triangle were first defined by paranormal researcher Loren Coleman in his book Mysterious America. and said to encompass the towns of Abington, Rehoboth and Freetown at the points of the triangle, and Brockton, Whitman, West Bridgewater, East Bridgewater, Bridgewater, Middleboro, Dighton, Berkley, Raynham, Norton, Easton, Lakeville, Seekonk, and Taunton inside the triangle. Similar claims have been made about an area in neighboring Vermont called the Bennington Triangle.

There have been several reported sightings of a bigfoot-like creature in the triangle, usually near the Hockomock swamp. Joseph DeAndrade claimed to see a half man and half ape creature entering the woods near the swamp in 1978. Local resident John Baker also reported seeing a large hairy beast in a river in the swamp while canoeing.

Various incidents of animal mutilation have been reported, particularly in Freetown and Fall River, where local police were called to investigate mutilated animals believed to be the work of a cult. Two specific incidents in 1998 were reported: one in which a single adult cow was found butchered in the woods; the other in which a group of calves were discovered in a clearing, grotesquely mutilated as if part of a ritual sacrifice. 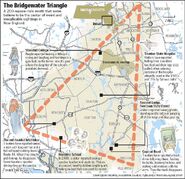 A rough map of the triangle
Community content is available under CC-BY-SA unless otherwise noted.
Advertisement