The Carnivorous Pink Cloud is a strange ghostly phenomenon that has supposedly been observed in the woods along the Tomoka River, west of Daytona, Florida. It has been blamed for numerous disappearances and the appearance of many carcasses.

Weird Florida contains an entry on the phenomenon:
"This phenomenon occurred in the area of the last Timucuan stronghold as recorded in 1605 by Spanish explorer Alvaro Mexia. One folk story suggests a connection between the pink cloud and an Indian legend about Chief Tomkie who violated local religious practices by seizing a golden cup and drinking from a sacred spring that was said to have healing powers. Was this the Fountain of Youth? Anyway, this offense caused the surrounding tribes to attack Tomkie’s band. However Chief Tomkie was unhurt in the battle. Then a beautiful Indian maiden named Oleeta, drew her bow on the great Tomkie and put an arrow into his heart. She rushed forward and grabbed the golden cup from the Chief’s hand only to be struck down with a poisoned arrow. She was still clutching the sacred cup when she died. Legend has it that the golden cup is still in the possession of Florida Indians at the present time. Allegedly Chief Tomokie’s spirit was compelled to forever wander in the mists of the Tomoka River." (Weird Florida)

The cloud has been described as being pink in color and hanging low to the ground, like morning fog. Other witnesses describe the cloud as being orange in color. Regardless of its color, the cloud has been blamed for many deaths and carcasses found in the woods. Legends state that the cloud is carnivorous and will suck the flesh off a person's bones. 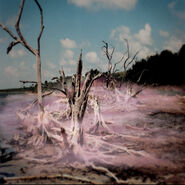 An illustration appearing in Weird US
Community content is available under CC-BY-SA unless otherwise noted.
Advertisement