The Cloud Giant was a bizarre humanoid figure photographed in January of 2016 by an Irish software support team manager named Nick O'Donoghue. Flying to Gatwick, England, from a ski trip in Austria, the 30-year-old plane passenger captured the bizarre image at 30,000 feet.

The entity resembles an enormous humanoid figure walking on the clouds.

I was flying back from a work ski trip in Austria, I was on the window seat with two work colleges beside me. They were talking like crazy and I was gazing out the window, as you do. I could see this figure in the distance in front of us and then as we flew closer this shape appeared. I asked the ladies beside me to look at it too in case I was seeing things. They too were amazed! I then took some pictures and then the aircraft slowly passed it. It was in view for about two minutes as it was a good bit away in the distance. To me it looked like the Michelin man but to be honest I have no idea what it was. Some comments online said it was smoke stacks below and the heat from them pushed up the layer of clouds, but I don't think so as they looked very close together. Probably just a funky cloud formation but I'd love for someone who knows about clouds to see it and try and explain. - Nick O'Donoghue [sic] (dailymail.co.uk) 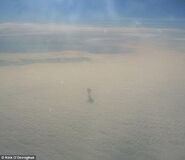 A photograph of the figure
Community content is available under CC-BY-SA unless otherwise noted.
Advertisement