The Clown Motel is an abandoned motel located just off Highway 95, about halfway between Las Vegas and Reno, on the edge of the town of Tonopah.

Once a booming, goldmining hotspot with a population of over 50,000, Tonopah now houses just around 2,500 people, most of whom work for the local military test range.

At one point early in the evening we were hearing strange sounds and what appeared to be someone screaming followed by lot popping and crunching noises. While in the bathroom my buddy decided to have a peak outside of the bathroom window. My buddy lets out a yell and busts out into the room and I'm like "what?!" He doesn't say anything but goes right to his back and gets his Smith and Wesson 357 out. I'm thinking "what the $%#" and I dig into my bag to get my Sig 232 out. He says we need to get the %@#& out of there right now. I saw he was serious and that made me serious about it, we grabbed our $#!^ for the most part (left a few clothes behind) and looked out the peep sight to make sure it was clear to our car. I threw my gun into my pocket, he put his in his waistband and we hauled ass to the car and got the hell out of there. On the ride away, I asked what he saw in the bathroom. He told me when he looked out the window there was this creepy-ass clown facing away from the window, pants at his ankles, making a weird motion. He told me the clown slowly turned 90 degrees to look at him, my friend said he looked down to see this clown $#@%ing a full-sized dinner ham, when he looked up from the ham $^@!ing the clown was smiling and waving at him. (roadtrippers.com) 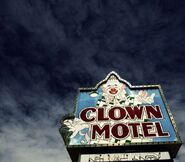 The lobby
Community content is available under CC-BY-SA unless otherwise noted.
Advertisement