The Crawfordsville Monster, also known as the Crawfordsville Dragon, is a dragon-like cryptid that was sighted over Crawfordsville, Indiana in 1891. The creature writhed as though in great pain, "squirmed in agony", and sounded a "wheezing, plaintive noise" as it hovered at 300 feet.

Witnesses described a violently flapping "thing" with a flaming red "eye", twenty feet long and eight feet wide. Descriptions of the creature vary, with some accounts suggesting that it had no head, and others describing it as having glowing red eyes and hot breath. Accounts generally agree that it is a large rectangular creature, possibly eel like in appearance, with several undulating fins down the sides of its body. Witnesses at the second appearance described the creature as writhing and squirming, and as producing a wheezing sound, as if it were in pain. 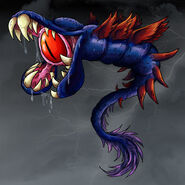 An artist's depiction (by nocturnalsea)
Community content is available under CC-BY-SA unless otherwise noted.
Advertisement