The Crazy Critter of Bald Mountain sighting was an alien sighting that took place on the evening of November 17, 1974, on Bald Mountain, situated approximately 20 miles east of Chehalis, Washington.

Three nights earlier, and only about 5 miles away, an unidentified fiery object plummeted to earth, but this attracted little publicity until Seattle grocer Ernest Smith saw the 'crazy critter'.

"...it was horse-sized, covered with scales and standing on four rubbery legs with suckers like octopus tentacles. Its head was football-shaped with an antenna sticking up...The thing gave off this green, iridescent light." 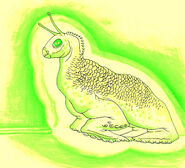