The Dade City Flowers sighting was an extraterrestrial sighting that took place sometime in 1924 in Dade City, Florida. While out playing in the schoolyard, a young Miss Evelyn Wendt was suddenly blinded by a bright light. When the light dimmed the girl saw a strange egg-shaped object sitting in the grass, and out of that came little robotic people carrying some sort of weapon or device.

Evelyn asked if she could help carry the device, but found it far too heavy. The robot flowers telepathically told her that they were going to "stop the work being done in the science building", even if it meant destroying the building.

Eventually, the robots went back to their egg-ship, but not before offering Evelyn the chance to come with. She declined, and they promised to return for her in 35 years. They boarded their ship, which flew straight up and hovered for a minute before flying off. 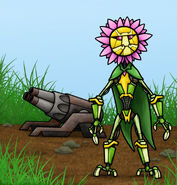