The Death Valley Sailing Stones are a geological phenomenon where rocks move and inscribe long tracks along a smooth valley floor without human or animal intervention.

Stones with rough bottoms leave straight striated tracks while those with smooth bottoms tend to wander. Stones sometimes turn over, exposing another edge to the ground and leaving a different track in the stone's wake.

Trails differ in both direction and length. Rocks that start next to each other may travel parallel for a time, before one abruptly changes direction to the left, right, or even back to the direction from which it came. Trail length also varies – two similarly sized and shaped rocks may travel uniformly, then one could move ahead or stop in its track. 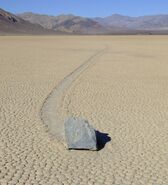 A photo of one of the stones
Community content is available under CC-BY-SA unless otherwise noted.
Advertisement