The Disappearance of Frederick Valentich was a strange disappearance that allegedly happened on October 21, 1978.

20-year-old Frederick Valentich disappeared while on a 125-mile (235 km) training flight in a Cessna 182L light aircraft over Bass Strait in Australia.

Described as a "flying saucer enthusiast", Valentich radioed Melbourne air traffic control that he was being accompanied by an aircraft about 1,000 feet (300 m) above him, that his engine had begun running roughly, and finally reported, "It's not an aircraft."

Valentich radioed Melbourne Flight Service at 7:06 PM to report an unidentified aircraft was following him at 4,500 feet (1,400 m) and was told there was no known traffic at that level. Valentich said he could see a large unknown aircraft which appeared to be illuminated by four bright landing lights. He was unable to confirm its type, but said it had passed about 1,000 feet (300 m) overhead and was moving at high speed. Valentich then reported that the aircraft was approaching him from the east and said the other pilot might be purposely toying with him. Valentich said the aircraft was "orbiting" above him and that it had a shiny metal surface and a green light on it. Valentich reported that he was experiencing engine problems. Asked to identify the aircraft, Valentich radioed, "It isn't an aircraft" when his transmission was interrupted by unidentified noise described as being "metallic, scraping sounds" before all contact was lost. A sea and air search was undertaken that included oceangoing ship traffic, a P-3 Orion aircraft, plus eight civilian aircraft. The search encompassed over 1,000 square miles. Search efforts ceased on October 25, 1978.

A Department of Transport (DOT) investigation into Valentich's disappearance was unable to determine the cause, but that it was "presumed fatal" for Valentich. Five years after Valentich's plane went missing, an engine cowl flap was found washed ashore on Flinders Island. In July 1983, the Bureau of Air Safety Investigation asked The Royal Australian Navy Research Laboratory (RANRL) about the likelihood that the cowl flap might have "traveled" to its ultimate position from the region where the plane disappeared. The bureau noted that "the part has been identified as having come from a Cessna 182 aircraft between a certain range of serial numbers" which included Valentich's aircraft. The bureau also noted that while it is possible for cowl flaps to separate from aircraft in flight, this had not happened with any recent aircraft. 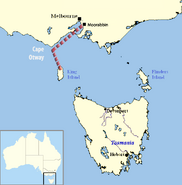