Disney's River Country was the first water park at Walt Disney World. It opened on June 20, 1976, and ceased operations on November 2, 2001. On January 20, 2005, The Walt Disney Company announced that River Country would remain closed permanently. Along with Discovery Island, it is one of only two Disney parks in history to close permanently. Both parks were abandoned rather than demolished.

Positioned on the shore of Bay Lake, near Discovery Island in Bay Lake, Florida, near Orlando, Florida, River Country featured a rustic wilderness theming, complete with rocks and man-made boulders. It was described as an "old-fashioned swimming hole" with "a twist of Huckleberry Finn". The original working title was "Pop's Willow Grove".

The park featured a sandy bottom and unique water filtering system using confluent water from adjacent Bay Lake, which was dammed off creating a natural-looking man-made lagoon. But even with the filtration system, the water from the lake was not completely purified. In 1980, an 11-year-old boy was killed by a deadly disease caused by an amoeba (Naegleria fowleri), which is found in warm bodies of fresh water, such as ponds, lakes, rivers, and hot springs. After entering the body through the nasal passages, the disease, primary amoebic meningoencephalitis, attacks the nervous system and brain. Although this occurs rarely, such an infection nearly always results in the death of the victim. The case fatality rate is greater than 95%.

As it did every year, River Country closed at the end of the warm-weather season (the park closed on November 2, 2001), with the expectation that the water park would reopen in the spring of 2002. But after the 9/11 attacks, the decline in business for all Disney parks and hotels prompted Disney to halt the reopening of River Country. On April 11, 2002, the Orlando Sentinel reported, “Walt Disney World’s first water park, River Country, has closed and may not reopen.” The report concluded with this line: “Disney World spokesman Bill Warren said that River Country could be reopened if ‘there’s enough guest demand.’” The attraction may also have been affected by a change in Florida laws, which prohibited unchlorinated natural water bodies from being used for water park attractions. River Country never reopened and remains abandoned as a forgotten Disney relic as of today. Disney employees monitor the area for trespassers. 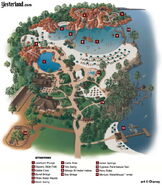