The Dos Palmas Winged Snake was a bizarre serpentine creature mentioned in an 1882 Los Angeles Times report from a train engineer and a firefighter. The encounter took place on the Southern Pacific express. After passing Dos Palms, the engineer noted what appeared to be a column of sand about a half a mile ahead, moving toward the track and looking like it was going to collide with the train. When the column came within a short distance, it was clear that it was some kind of animal.

The report said, “It was moving in almost a perpendicular position, the tail dragging on the ground and propelled by two large wings near the head. The bird, snake, or whatever it was,” appeared to be about 30 feet long and a foot in diameter. 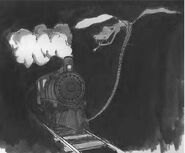