The East River Monster was the name given to a strange animal carcass that was discovered underneath the famous Brooklyn Bridge in New York City. The strange 7-foot long beast was found at the foot of the Manhattan side of the bridge on May 21st, 2011, by a Manhattan cyclist who was on his evening commute.

Maureen O’Connor, a blogger on the Gawker website, which broke the story, described the critter: “It had the scales of a fish, body of a serpent, head of a pit bull and was the size of a large alligator.”

The only known photograph 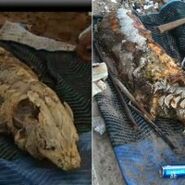 A close-up of the original photograph