El Cuero is a strange, carnivorous, aquatic cryptid thought to dwell in the Chilean glacial Lake Lacar, which is located in the Andes Mountains.

El Cuero, meaning "cowhide" or "leather" resembles a primitive stingray at most. It has wide pectoral fins and a long, whip-like tail, absent of a barb. Its eyes are on stalks and its mouth is apparently extendable, like that of a sturgeon. Eyewitness have also reported seeing a series of razor sharp claws along the fringes of El Cuero, which the creature uses to secure its prey. The size of El Cuero ranges from 2-5 feet across and it weights approximately 65 pounds. 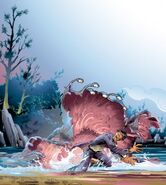