The Enfield Horror was an extremely bizarre cryptid that infamously terrorized the small Illinois town of Enfield. The bizarre string of events began on the chilly night of April 25, 1973, when a young boy named Greg Garrett claimed to have been attacked by a truly bizarre beast while playing in his backyard.

The child described the being as having no less than three legs, grayish, slimy skin, short claws and reddish eyes. The creature apparently “stamped” on the boys feet with its own three — apparently clawed — foot-like appendages, tearing his tennis shoes to shreds. 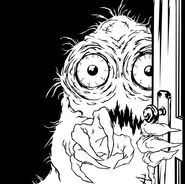