The Farmersville Green Man sighting was an extraterrestrial sighting that took place in May of 1913 near Farmersville, Texas. While chopping cotton one May morning, Clyde, Sid, and Silbie Latham heard their two dogs barking as if in distress. The three brothers ran to see what was bothering them, and found the dogs had cornered a small green man which appeared to be made of rubber. In an instant the dogs were upon the man and shredded him in their teeth, leaving only miniature human-like remains.

The disturbing incident remained a family tradition until Silbie's grandson related the story in a letter to the Center for UFO Research (CUFOS). Silbie Latham himself was later interviewed by Larry Sessions of CUFOS, but the transcript has since been lost.

It is not to be confused with The Green Man.

No taller than 18 inches, the dark green creature was devoid of clothing save for a small hat similar to a sombrero, which was fused to his rubbery "skin." This hat was at the back of his head and was described as like a small sombrero and being shaped together with the remainder of the rubber-like skin or tight-fitting suit of the little character. On this point all witnesses appear to have been undecided as to whether the rubbery texture was skin or external suit. His arms hung downwards along the body. Curiously the little man did not respond to being seen by the boys, nor did it even move or cry out when attacked by the dogs. As Latham would recollect "He looked like a man taken for a halt."

Silbie Latham (12) and his brothers Sid and Clyde were chopping cotton on their farm, when they heard their dogs bark, as if in distress. After a few minutes they went to investigate and found a little man no more than 45cm tall, dark green in colour, his arms hanging down by his side, and wearing a little round sombrero which seemed to be part of his body, The creature was naked and appeared to be made of rubber. Before the boys could absorb any more detail the dogs pounced on the creature, tearing it apart and spreading blood and guts all over the place. The boys returned to their work but went back to the scene from time to time to see rotting remains and the dogs cowering from the spot. By the time their parents investigated all traces had disappeared. ([1]) 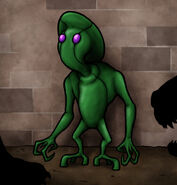