The first sightings occurred in November 1944, when pilots flying over Germany by night reported seeing fast-moving round glowing objects following their aircraft.

However, they could not be outmaneuvered or shot down. The phenomenon was so widespread that the lights earned a name - in the European Theater of Operations they were often called "kraut fireballs" but for the most part called "foo-fighters". The military took the sightings seriously, suspecting that the mysterious sightings might be secret German weapons, but further investigation revealed that German and Japanese pilots had reported similar sightings.

The objects were variously described as fiery, and glowing red, white, or orange. Some pilots described them as resembling Christmas tree lights and reported that they seemed to toy with the aircraft, making wild turns before simply vanishing.

Pilots and aircrew reported that the objects flew formation with their aircraft and behaved as if under intelligent control, but never displayed hostile behavior. 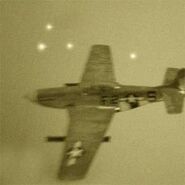 An alleged photograph
Community content is available under CC-BY-SA unless otherwise noted.
Advertisement