The Georgia Stalks sighting was an extraterrestrial sighting that took place in July of 1951. The witness, pilot Fred Reagan, was flying his Piper Club over Georgia when he felt a mysterious force pull his plane upward, crashing it into an unidentified flying object.

The hovering creatures, or perhaps robots, apologized to him for the accident, gave him a quick medical exam and informed him that they had he was now cured of cancer, which he never knew he had. Fred was eventually found unconscious in a field without so much as a scratch, the wreckage of his plane nearby. Its engine was buried almost six feet into the ground, having fallen thousands of feet. (bogleech.com)

Finding himself suddenly inside the strange craft, he encountered three entities, roughly three feet in height, which he likened to giant, metallic stalks of asparagus. (bogleech.com) 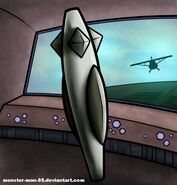