Ghost Cities are bizarre manifestations that have been witnessed multiple times in China since 2011. In early October of 2015, residents of Foshan, China, saw a mysterious ghost city hovering over their own city. It happened again a few days later in Jiangxi.

The phenomenon is described as a mysterious ghostly city that appears in the skyline, usually in times where there are thick clouds in the sky, that appears to float high above the ground.

There are many explanations as to what the phenomenon could be. Theories include:

A ghost city above Foshan, China 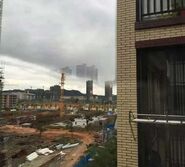 A ghost city above Jiangxi, China

A ghost city over river in Huanshan City