The Gilled Antelope (Cetaformia anthalopus), also known as the Gilled Deer, was a cryptid believed to exist in Cambodia. It was believed to have possessed the remarkable capability to breathe underwater through the use of gills set along its muzzle. Eventually however the creature was determined to be the Saola, discovered in 1992.

While the creature was discovered to be in fact real, it did not possess gills of any sort—these gills turned out to be a case of mistaken identity instead. The real species, the Saloa, has a large set of maxillary glands or sinuses situated just in front of its eyes. The external portion of the gland forms a rectangular depression along the upper muzzle approximately 9 centimeters in length. Covering this depression is a muscular flap which can be raised to expose the gland. The Vu Quang Ox is native mainly to Socialist Republic of Vietnam and the Lao People's Democratic Republic, though it is not impossible that sightings in northeast Cambodia could have occurred. 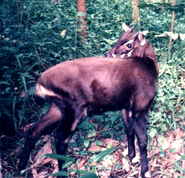 A photograph
Community content is available under CC-BY-SA unless otherwise noted.
Advertisement