The Gnome of Girona (Lepugnomus gerundensis) also known as the Gnomo de Girona, is the name given to the remains of an animal or a fetus found near Girona, Catalonia (Spain), in September 1989 that aroused some attention from the Spanish media, especially some TV programs specialized in parapsychology and the paranormal such as En los límites de la realidad and Otra dimensión.

The being had been captured by some campers about 11 kilometers from Girona, in the route from the villages of Banyoles to Olot. They were near a forest when one of them heard some noises similar to low volume moans. When he looked in the direction from where the noises were coming he spotted the being, that tried to escape moving fast from them. The being emitted "a kind of squeak similar to an old man's laughter". The campers managed to capture the being by throwing a blanket over it.

The being then remained alive for approximately 24 hours after its capture, although other versions of the story extend this time to four days. It refused all food offered to it although according to its captors showed some degree of intelligence. After its death, the Spanish parapsychologist Ángel Gordon got the body and preserved it in a jar with formol.

The creature's body was bluish, devoid of hair, with some little spots mainly in neck and face. Its total length was approximately 12 centimeters (4.7 in). It showed a protuberance in the forehead area, elongated ears, reddish eyes and a snout similar to that of rodents. Its fingers showed inter-digital membranes. 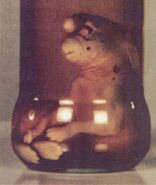 A photo of the corpse

A diagram of the creature