Grant Park, or specifically Grant Park's Seven Bridges, is a purportedly-haunted park in South Milwaukee, Wisconsin and a part of the Milwaukee County Park System.

It has been said that walking the paths during a full moon between the hours of 9:30 PM and midnight will summon the park's spirits. Visitors report seeing strange lights and hearing laughter and screams.

Okay I have been to 7 bridges not a lot but a hand full of times but upon googling 7 Bridges South Milwaukee you will find webpage after webpage of the hauntings of the 7 bridges area. Every webpage basically says this: It has be rumored that if you go to Seven Bridges and walk the paths during a full moon between the times of 9:30pm and Midnight (Don’t walk alone)you will see different colors of lights dancing around in the woods and if you go farther into the woods you would hear what sounds to be laughter and screams. If you are really quiet you can hear foot steps in the woods coming towards you and with those foot steps you can hear very heavy breathing, if you wait for those foot steps to come to you, you will feel a very uneasy feeling come over you like an evil feeling. It’s said that adults and children have been killed there and even suicides from the people that did the killings. (WARNING! the park closes at 10:00pm, so don’t park in the park after that time, park on a side street. If you get caught by police you will get ticketed). It’s also rumored that if you stand on one of the bridges that a mist or an apparition of a person would happen right in front of you. The [sic] -Milwaukee City

As you enter the park, you cross under a covered bridge that bears the inscription, "Enter this wild wood and view the haunts of nature." Several people through out the parks's existence have committed suicide by jumping or hanging themselves from the main entrance bridge and by other means. When standing on the main bridge looking down into the ravine, often times it looks as though the air is filled with sparkles and shimmers, and has a very strong "feel". Many people have reported seeing colorful glowing lights dancing amongst the trees, and have heard voices and footsteps when there was (seemingly) no one around. At night, you can sometimes hear a strange (and not pleasant) scream/screech coming from something deep in the woods. There have been also been reported sightings of odd human-sized creatures that bear a striking resemblance to a praying mantis. Please heed park hours. You will be ticketed. I know from experience. -Milwaukee City

A photo of one of the bridges 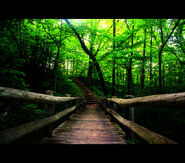 A photo of one of the bridges
Community content is available under CC-BY-SA unless otherwise noted.
Advertisement