The Green Children of Woolpit were two children of unusual skin colour who reportedly appeared in the village of Woolpit in Suffolk, England, some time in the 12th century, perhaps during the reign of King Stephen. The villagers of Woolpit discovered two children, a brother and sister, beside one of the wolf pits that gave the village its name.

The children, brother and sister, were of generally normal appearance except for the green colour of their skin. They spoke in an unknown language, and the only food they would eat was beans. 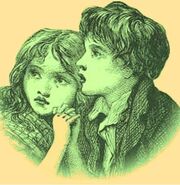 A sign in Woolpit commemorating the children
Community content is available under CC-BY-SA unless otherwise noted.
Advertisement