The Grinning Man, sometimes referred to as Indrid Cold, is an entity first spotted in the 1960s in New Jersey. He is sometimes connected to UFO sightings and the cryptid Mothman, and is believed to be an extra/ultraterrestrial being.

In October 1966, two boys (James Yanchitis and Marvin Munoz) spotted a strange man standing behind a fence. They described the man as having a "big grin" and, supposedly, someone in that neighborhood also reported being chased by a greenish man.

In November 1966, Woodrow Derenberger was driving home when he heard a crash. He stopped his car and saw a strange vehicle come alongside next to him. Allegedly this vehicle was pouring fire from both ends and was similar to a kerosene lamp in shape. An individual exited the vehicle, supposedly The Grinning Man, dressed in metallic green overalls. This characteristic fits with what was reported by Yanchitis and Munoz a month earlier. The individual identified themselves as "Indrid Cold" and supposedly interrogated Derenberger telepathically about UFO sightings in the area. 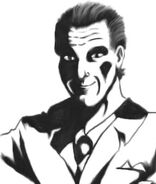