The Hollingworth Lake Monster was the name given to a strange animal carcass that was discovered in the British Hollingworth lake on August 3, 2015.

The corpse was over five feet long and riddled with long, sharp teeth. The creature appeared to be a serpent, with a long slithering body. 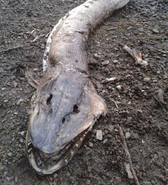 A photograph of the creature
Community content is available under CC-BY-SA unless otherwise noted.
Advertisement