The Hook Island Sea Monster, also known as the Tadpole Creature, was an aquatic cryptid reportedly sighted off the coast of Hook Island.

The monster was sighted by Robert Le Serrec and his family in 1964 when it moved towards his ship with its mouth open as if to attack. He spotted its tail was injured, probably by a ship's propeller or by a larger creature.

The creature was described as enormous, roughly 70-80 feet in length. It resembles a giant tadpole, has a gaping mouth with small teeth, and eyes placed on top of its head. The skin looked more like that of a shark than an eel. There were no apparent scales. 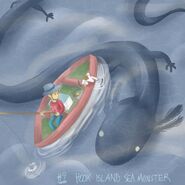 An artist's depiction (drawn by eternalsaturn)
Community content is available under CC-BY-SA unless otherwise noted.
Advertisement