The Hopkinsville Goblin sightings were a series of connected incidents of alleged close encounters with supposed extraterrestrial beings. These were reported in 1955, the most famous and well-publicized of which centered on a rural farmhouse, at the time belonging to the Sutton family, which was located between the hamlet of Kelly and the small city of Hopkinsville, both in Christian County, Kentucky, United States.

The seven people present in the farmhouse claimed that they were terrorized by an unknown number of creatures similar to gremlins, which have since often been referred to as the "Hopkinsville Goblins" in popular culture. The residents of the farmhouse described them as being around three feet tall, with upright pointed ears, thin limbs (their legs were said to be almost in a state of atrophy), long arms and claw-like hands or talons. The creatures were either silvery in color or wearing something metallic. On occasion, their movements seemed to defy gravity, with them floating above the ground and appearing in high-up places. They "walked" with a swaying motion as though wading through water. Although the creatures never entered the house, they would pop up at windows and at the doorway, waking up the children in the house in a hysterical frenzy. 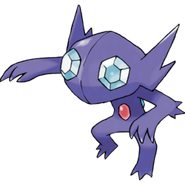 The Pokemon Sableye
Community content is available under CC-BY-SA unless otherwise noted.
Advertisement