The Huallepen, also known as the Huallipen or the Guallipen is a strange, bovine-like cryptid said to haunt the lakes and rivers of Chile. This beast’s name derives from the Mapuche word Wallipén which translates as “sheep-calf.”

It is somewhat similar to El Cuero or the Crazy Critter of Bald Mountain.

The Huallepen has the body of a sheep or cow and the head of a young calf. It had twisted feet with short front legs and a back end that resembles a seal. It lives in pools and frequently mates with other herded animals. The offspring it produces have twisted muzzles and legs. 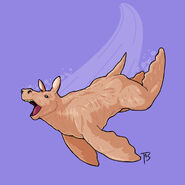 Artist's depiction(another one)
Community content is available under CC-BY-SA unless otherwise noted.
Advertisement