Island of the Dolls

The Island of the Dolls (Spanish: La Isla de las Muñecas) is an island situated at the Xochimilco Canals in Mexico. It is an island in Mexico that is said to have been haunted by the young girl who drowned on the river nearby the island

The area has thousands of people, but this small island is home to hundreds of terrifying dolls. Their severed limbs, decapitated heads, and blank eyes adorn trees.

Don Julian Santana Barrera was the caretaker of the island. The story goes that Julian found a little girl drowned in mysterious circumstances while he was not able to save her life.

Shortly thereafter, Julian saw a floating doll near the canals. Most probably, the doll belonged to the girl.

He picked up the doll and hung it to a tree, as a way of showing respect and support the spirit of the girl.

Julian was apparently haunted by the spirit of the girl and started hanging more dolls in an attempt to please her spirit.

He soon realized the dolls themselves were possessed by the spirits of dead girls, and continued to collect creepy dolls hanging them over the entire island. (isladelasmunecas.com) 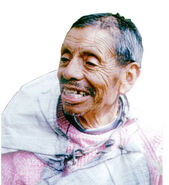 A photo of the island

A photo of the island

A photo of the island
Community content is available under CC-BY-SA unless otherwise noted.
Advertisement