The J'ba Fofi (Baka: "giant spider"), also known as the Congolese Giant Spider, is a cryptid that is said to exist in the Congo, possibly representing a new species of arachnid. It is considered a cryptid and only in recent years has received publicity.

The J'ba Fofi is described as having a brownish body similar to that of a tarantula, with a legspan of four to six feet. Juvenile versions possess yellow coloring that turns brown as they grow older.

The spiders are described by Baka natives as weaving lairs made of leaves and spinning a circular web between two trees. The animals are said to prey upon birds, duiker, and other small game animals. The Jba Fofi is described as having an appearance the same as that of a tarantula.

William Slaydon and his grandchildren were walking north on Highway 171 to church when he motioned them to stop. After hearing a rustling in the bushes ahead a spider described as being the size of a washtub emerged and crossed the road. One of the grandchildren would later tell this story to his own son, Todd Partain, director of the documentary film "Eyes In The Dark: The Sasquatch Experience." 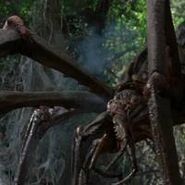 A reconstruction
Community content is available under CC-BY-SA unless otherwise noted.
Advertisement