The Jodhpur Baby was a strange humanoid body discovered in Jodhpur's Bawadi village, where the villagers were digging tube well to fetch water.

It is very similar to the Mutant Muppet.

The creature resembles a small humanoid creature, almost human in nature. It appears to be 5 inches in height. It has very large, bulbous eyes, dark red skin, and a lighter underbelly. 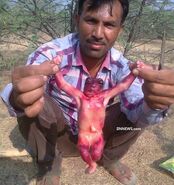 A photo of the creature
Community content is available under CC-BY-SA unless otherwise noted.
Advertisement