The Kinnula Humanoid sighting is a extraterrestrial sighting that took place in the evening of February 2, 1971. At approximately 8 pm., two Finnish women, Sinikka Kuittinen and one Mrs. Manninen, were driving from Kuusamo towards Oulu (in a region near Kiiminki) when they spied a strange light behind their car on the right side of the road. After a few moments this mysterious light slipped over the vehicle and began to pace the car on the left side of the road.

The entity was described as a peculiar, helmeted creature that stood approximately 3-feet tall. The enigmatic entity was clad in a greenish-brown suit and crossed the road in front of the two women utilizing a series of small jumps. On the front of the head was a face plate that was described as being akin to that of a scuba diver. Although the creature had arms and legs, the suit gave no indication of hands or fingers. 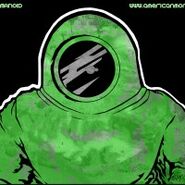