The Kofu Fanged Humanoids sighting is a extraterrestrial sighting and abduction case that took place sometime before 7 PM on the evening of February 23, 1975 near the Hinode Housing Estate in Kamimachi, Kōfu, Yamanashi, Japan.

Two grade-school boys, Masato Kawano and Katsuhiro Yamahata, were roller skating when they noticed a pair of “glittering,” orange UFOs frolicking in the sky above. The enthralled boys stared in awe as the larger of the two objects broke off and flew toward Mt. Atago, while the smaller one slowly descended to the ground, landing amongst the props of a vineyard behind the estate. The boys later stated that the strange aerial objects emitted an odd crackling or “ticking” sound, not unlike that of a Geiger counter.

As the two 2nd Graders approached the formerly orange "space craft" they saw that it was actually a domed, silverish disc, which stood approximately 7-feet high and was almost 15-feet in diameter. This classically shaped flying saucer was perched on "three ball-shaped legs" and had what the children described as “strange characters” embossed on the metallic surface of its hull. While inspecting the craft, both Kawano and Yamahata were astounded — and no doubt a bit frightened — to see a hatch open on the side of the craft and a ladder automatically extending down to the ground below. The boys watched in stunned silence as and a bizarre humanoid creature disembarked from the ship. It was at that moment that the boys noticed another — smaller, though similar looking — humanoid that remained inside the control room. Kawano and Yamahata reported that the first creature was long-armed, almost 4-feet tall and was clad in a “glowing” or reflective silver uniform.

The Kofu entity’s skin was described as being dark brown and covered in wrinkles so dense that they obscured any noticeable features, save three, two-inch long, metal "fangs". 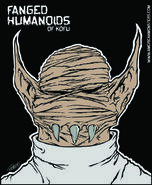