The Kovahsi Creature was a strange carcass found on the banks of the river Kovahsi in the town of Sosnovy Bor in western Russia. A woman named Tamara told reporters that she found the creature on the Kovashi River, which flows into the Gulf of Finland. (mysteriousuniverse.org)

The creature appears to be between 3-4 centimeters in length and blackish-brown in color. The creature has an oddly-shaped skull, a long-neck, and a long leg-like appendage. The witness Tamara also claimed that it appeared to have what resembled wings. 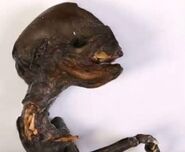 A photo of the corpse

A still from a news broadcast about the corpse 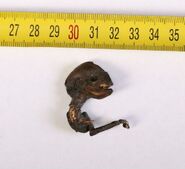