The first reported sighting of the horrifying creature was made by Christopher Davis, a 17-year-old local, who said he encountered the creature while driving home from work at 2 AM on June 29, 1988. According to his account, Davis stopped on a road bordering Scape Ore Swamp in order to change a tire which had blown out. When he was finishing up he reported having heard a thumping noise from behind him and having turned around to see the creature running towards him. Davis said the creature tried to grab at the car and then jumped on its roof as he tried to escape, clinging on to it as Davis swerved from side to side in an effort to throw it off. After he returned home, Davis' side-view-mirror was found to be badly damaged, and scratch marks were found on the car's roof, though there was no other physical evidence of his encounter.

The Lizard Man is generally described as being 7 feet (2.1 m) tall, bipedal, and bulky, covered in dark hair with scaly lizard-like skin on its hands, feet and face. It is said to have three toes on each foot and three fingers on each hand. The creature has an incredible degree of strength, more than capable of ripping into a car. A few witnesses have reported seeing a tail, although in the majority of cases, a tail was not seen.

A sketch of the creature

A newspaper headline about the creature

A photo of Scape Ore Swamp 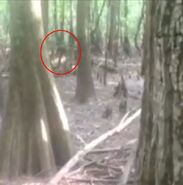 An alleged photograph that went viral