The Long Prairie Cans sighting was an extraterrestrial sighting that took place on October 23, 1965, near Long Prairie, Minnesota. While out driving one evening, witness James Townsend encountered a large, upright rocket in the middle of the road. Wanting evidence, Townsend decided to knock it over with his car. However his car stalled, so he got out to knock it over by hand.

After a few minutes, the aliens in question went up into the "colorless" light into the rocket, and took off into the night, leaving behind three parallel lines of an oily substance.

Upon leaving his car, Townsend sighted three small beings that looked like beer cans. They walked awkwardly on two fins, extending a third whenever they stopped. 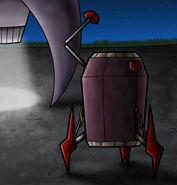