The Maltese Tiger, or Blue Tiger, is a reported but unproven coloration morph of a tiger, reported mostly in the Fujian Province of China. It is said to have bluish fur with dark grey stripes. Most of the Maltese tigers reported have been of the South Chinese subspecies. The South Chinese tiger today is critically endangered, due to their illegal and continued use in traditional Chinese medicine and the "blue" alleles may be wholly extinct. Blue tigers have also been reported in Korea. It is believed by some that tigers of many colors exist, like purple, red, yellow, and so forth, but no proof has been given.

The Maltese Tiger is said to have bluish fur with dark grey stripes. 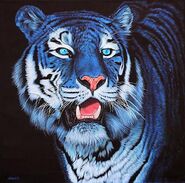