The Manor Road Pig-Dog was a bizarre hybrid creature sighted on the morning of February 6, 2009, by two men driving along Manor Road in Baltimore County.

The animal had hind legs longer than the fore, and its face was a hybrid of dog and pig features. The two were quite clear that it was neither a dog or bear - it apparently had thinner legs than a bear and didn't move in the same way as a bear. 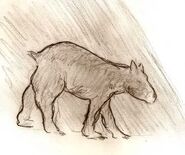