The Michigan Dogman is a mysterious cryptid that has made many appearances throughout Michigan, (sometimes in various neighboring states) first being seen in Wexford County.

The Dogman is best known for being the subject of the Steve Cook series of Dogman-related songs starting with "The Legend". It is also featured in the final episodes of both seasons 1 and 4 of the History Channel show, MonsterQuest.

It is often described as having the body of a man and the head of a dog, or simply a large dog that walks on two legs. 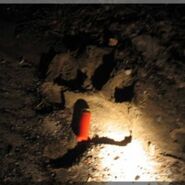 The official sketch of the creature