The Minhocão ("big earthworm" in Brazilian Portuguese) is a large earthworm or serpent-like cryptid that allegedly exists in the forests of South and Central America.

The Minhocão reportedly resides in the wettest and warmest areas of South and Central America, and is a feared part of the culture in that region. The ancient Mayans depicted, through cave carvings and paintings, an extremely large serpent who was believed to eat humans. Some believe these drawings to be of the Minhocão. The possibility that the Minhocão still exists deep in the unexplored forests of South and Central America is debated, though there have been rumored sightings of the ancient serpent as recent as 2013. The Minhocão burrows massive trenches in which it will hide or live in.

The Minhocão is said to resemble a giant, 20-50 meter worm or serpent, with scaly black skin covering its entire body. A member of the Serpentes suborder, this serpent is reported to be ectothermic and have highly mobile jaws and is thought to be a burrowing animal, dwelling in enormous trenches or caves beneath the jungle floor. 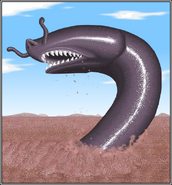