The Monkey-man of Delhi was a monster which was reported roaming Delhi in mid-2001. In May 2001, reports began to circulate in the Indian capital New Delhi of a strange monkey-like creature that was appearing at night and attacking people.

Eyewitness accounts were often inconsistent, but tended to describe the creature as about four feet (120 cm) tall, covered in thick black hair, with a metal helmet, metal claws, glowing red eyes and three buttons on its chest; others, however, described the Monkey-man as having a more vulpine snout, and being up to eight feet tall, and muscular; it would leap from building to building like a parkour enthusiast. Still others have described it as a bandaged figure or as a helmeted thing. 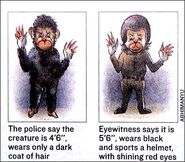 Police sketches of the creature